It is easy to look at the numbers and see the reasoning behind the nursing shortage. A lack of funding of nursing programs is resulting in thousands of qualified applicants being rejected from nursing programs each year. However, another reason for the nursing shortage is one not as commonly reported through statistics: job burn out. While nursing has its rewards and benefits, it is of course a stressful career which many people find themselves to be burned out on before many years have passed.

Burn Out in the Nursing Profession

Part of the reason why nurses experience job burn out is the shortage itself. With fewer nurses entering the work force, hospitals and clinics are forced to keep their existing nurses on the floor for longer than they normally would work. These nurses become frustrated and exhausted when having to care for a larger group of patients because of the lack of nurses available. This frustration and exhaustion can lead to job dissatisfaction which can greatly influence a nurse’s work environment. Nursing shortages and turnover rates have been reported to be the highest in critical care facilities, in which nurses are worked for long hours and have to care for more patients then they feel they can safely care for.

Demands and Rewards for Nurses

It is not unusual for nurses to work 12-hour plus shifts for upwards of three days in a row. Although they receive some time off during the week, those long shifts can take their toll on the mental and emotional health of the nurse. They may find it difficult to complete other activities and to meet responsibilities outside of work because of the burn out they experience because of their highly stressful jobs. One study reported that approximately one out of every three hospital nurses under the age of 30 said they plan to leave their position within the current year. This is a dramatic number when the impact of the nursing shortage is taken into consideration.

The world of nursing does have its rewards. Nurses often make the biggest impact on patients and provide the majority of the patient care. However, a stressful work environment caused by the nursing shortage is only making the shortage itself worse. 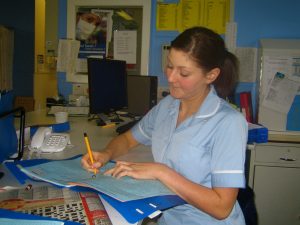